The broadband Grafenberg array (Germany) has been installed in 1976 and, thanks to visionary scientists and network maintainers, the continuous data acquired has been preserved until today. Using state of the art pre-processing and cross-correlation techniques, we are able to extract cross-correlation functions (CCF) between sensor pairs.

It has been shown recently that, provided enough computation power is available, there is no need to define a reference CCF to compare all days to. Indeed, one can compare each day to all days, computing the "all-doublet". The number of calculations becomes huge (N vs ref = N calculations, N vs N= N*N), but the result, once inverted, is way more stable because of the N observations per day. This analysis has been done on a parallelized version of MSNoise (http://msnoise.org), running on the VEGA cluster hosted at the Université Libre de Bruxelles (ULB, Belgium).

Here, we present preliminary results of the analysis of two stations, GRA1 and GRA2, the first two stations installed in March 1976. The interferogram (observation of the CCF through time, see Figure) already shows interesting features in the ballistic wave shape, highly correlated to the seasons. A reasonably high correlation can still be seen outside the ballistic arrival, after +-5 second lag time. The lag times between 5 and 25 seconds are then used to compute the dv/v using the all-doublet method. We expect to evidence daily to seasonal, or even to longer period dv/v variations and/or noise source position changes using this method. Once done with 1 sensor pair, the full data of the Grafenberg array will be used to enhance the resolution even more. 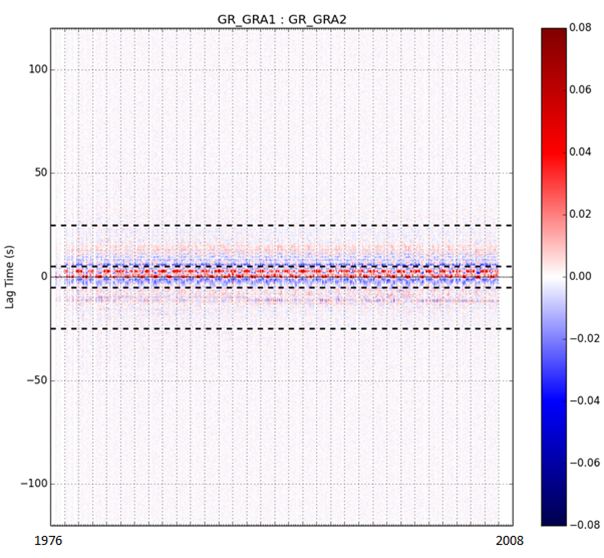