Each year during winter season (December-January), dense fog engulfs the Indo-Gangetic Plains (IGP) in southern Asia, for more than a month, disrupting daily life of millions of people inhabiting the IGP. The widespread nature of the fog is frequently visible in satellite imagery, extending over a stretch of ~1500 km; that covers parts of Pakistan, northern India, Nepal and Bangladesh. Both, haze and fog are a tightly-coupled system over the IGP, during winter months, and have been a major environmental/climatic issue since the past several decades. Trends in poor visibility suggest a significant increase in worsening air quality and foggy days over the IGP. The persistent and widespread nature of the winter haze and fog is strongly influenced by the regional meteorology during wintertime, i.e. a stable boundary layer, low temperatures, high relative humidity and light winds. The valley-type topography of the IGP, adjacent to the towering Himalaya, and high concentrations of pollution aerosols, further favors the persistence of hazy/foggy conditions. A satellite-based observational portrayal will be presented, using various cloud, aerosol and radiation datasets, to characterize the widespread nature of winter haze and fog, based on a multi-sensor assessment from MODIS, CERES, AVHRR and CALIPSO datasets. More specifically, based on these observations, we will present results on: long-term trends/variability of winter haze and fog, vertical characterization of aerosol/fog/low-clouds, as well as assessment of the direct radiative effect of the region-wide haze/fog system. Results from this work are anticipated to shed light on the overall interactions within the highly persistent and tightly-coupled haze-fog phenomena. Additionally, against the backdrop of a changing climate scenario, possible linkages between the winter-time fog cover, regional meteorology and aerosol loading will also be discussed over the IGP. 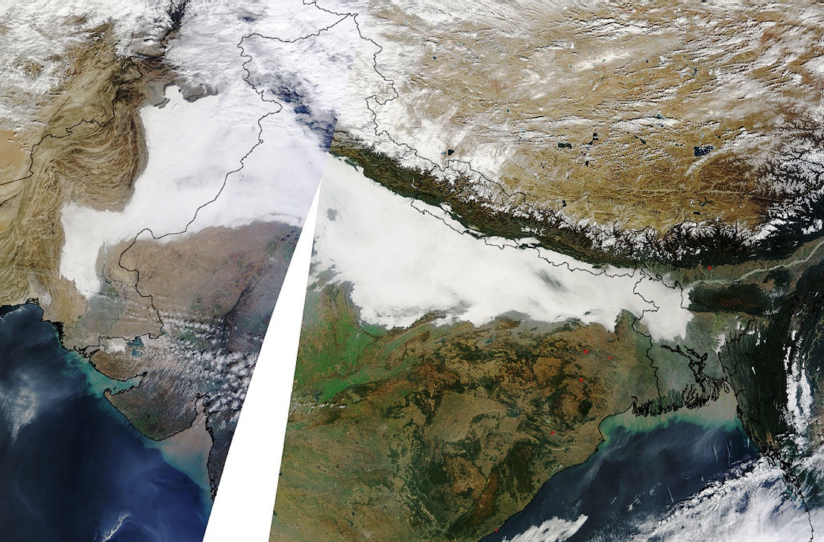