V51C-4769:
In Situ Observations of Crystallization in Water-Undersaturated Pegmatite Liquids

Crystallization behavior of water-undersaturated haplogranite-Li-B-H2O melts was observed and recorded in diamond anvil cell (DAC) experiments. We have generated salient pegmatitic features such as coarse and zoned crystals; comb and radiating textures; and graphic intergrowths from moderately-fluxed granitic melts in the absence of a hydrous phase. The experimental conditions placed the hydrous melt under variable degrees of undercooling between their liquidus and glass transition. Undercooling of ~100-150°C below the liquidus produced crystals that reached 0.4 of cell diameter in less than one day.

The starting material was a homogeneous glass with 2% Li2O, 4.6% B2O3, and 3.0 or 6.5% H2O synthesized in an internally heated pressure vessel at 1200°C and 400 MPa. The composition was selected to approximate bulk cores of Li-rich pegmatites. The crystallization temperature was dropped in 50°C intervals from 600°C to 400°C to simulate pegmatite cooling. Run duration was < 3.2 days. The pressure of ~150 to 450 MPa was generated isochorically, based on a preconfigured ratio of glass to void space (created by femtosecond laser drilling) included in the cell. The shift in the wavenumber of the ν3-SiO4Raman band of a chemically inert zircon crystal was used to determine pressure as a function of temperature.

Reproducible phase assemblages were documented using Raman spectroscopy and EPMA. Virgilite (solid solution between SiO2 and LiAlSi2O6) nucleated at T≤600°C. Alkali-feldspar and muscovite nucleated at T≤550°C. Virgilite and alkali-feldspar nucleated heterogeneously on surfaces of zircon, gasket, and diamond windows (see attached figure), whereas muscovite nucleated homogeneously. Development of pegmatite texture was facilitated by the relatively low nucleation density at P of ~300 to 400 MPa. Radically higher nucleation density at an estimated P of <2.5 GPa led to an equigranular, fine-grained texture. Time-lapse photography allowed for accurate growth-rate measurements and demonstrated constant volumetric growth rate of unobstructed crystals at low to moderate fraction of crystallization. The DAC experiments complement prior kinetic studies conducted in 3 to 60 day-long time series runs in cold-seal vessels. This technique has a great potential for further applications in physical petrology. 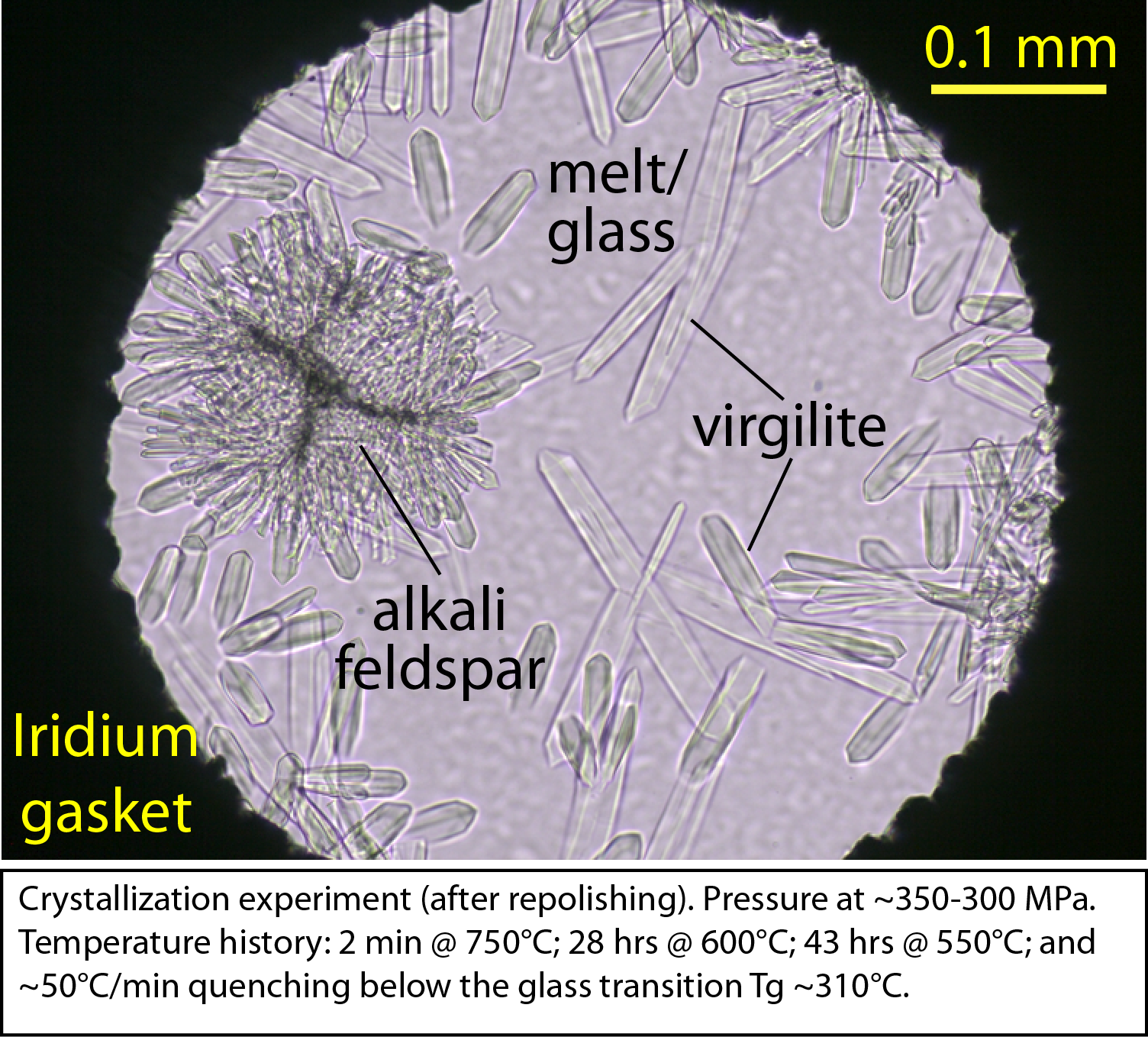