OS51B-0976:
Estimation of the Effect of Pressure on the Equilibrium of the TRIS Buffer System

Recently, autonomous sensors have been developed to profile the in-situ chemistry of a water column. These sensors provide extensive, long-term data of ocean chemistry, contributing to our understanding of the state of oceanic pH and overall trends in acidification. Measurements obtained from these sensors should account for the effects of in-situ physical parameters on the chemical equilibria of the system. TRIS-HCl buffers are frequently used in calibration of pH measuring systems. The effects of temperature and salinity on its dissociation constant (K) at 1atm pressure are understood; however, the effects of higher pressures are yet uncharacterized.

The effect of pressure on the thermodynamic equilibrium constant can be represented by KP/K0, where the superscript P denotes gauge pressure and 0 denotes atmospheric pressure. For weak acids, this can be estimated from data of the partial molal volumes (v0) and compressibilities (k0) measured at 1atm. We have measured the density and sound speed of TRIS and TRIS-HCl to determine values for v0 and k0 in water, NaCl, and seawater as a function of temperature. Results show that the partial molal properties are higher in NaCl than in water and increase with temperature. This is attributed to changes in solute-solvent interactions and solute-hydration. The values in seawater and NaCl of equal ionic strength are in reasonable agreement, supporting the use of NaCl as a medium representative of seawater. The results are used to estimate the effect of pressure on the dissociation of TRIS-HCl up to 1000 bars. The effect of pressure is found to be greater in water than in NaCl or seawater, and decreases with temperature. The largest effect is seen in water at 5oC (K1000 = 1.044 K0). While this deviation may appear to be minor, it offsets the pK(TRIS-HCl) by 0.02 units, well within the reporting limits. Thus, the effect of pressure becomes more important in freshwater systems with low in-situ temperatures. These new equations for the pressure-dependence of pK(TRIS-HCl) can be used in conjunction with the previous equilibrium studies made at 1atm to improve the calibration of in-situ pH measurements for an aquatic water column. 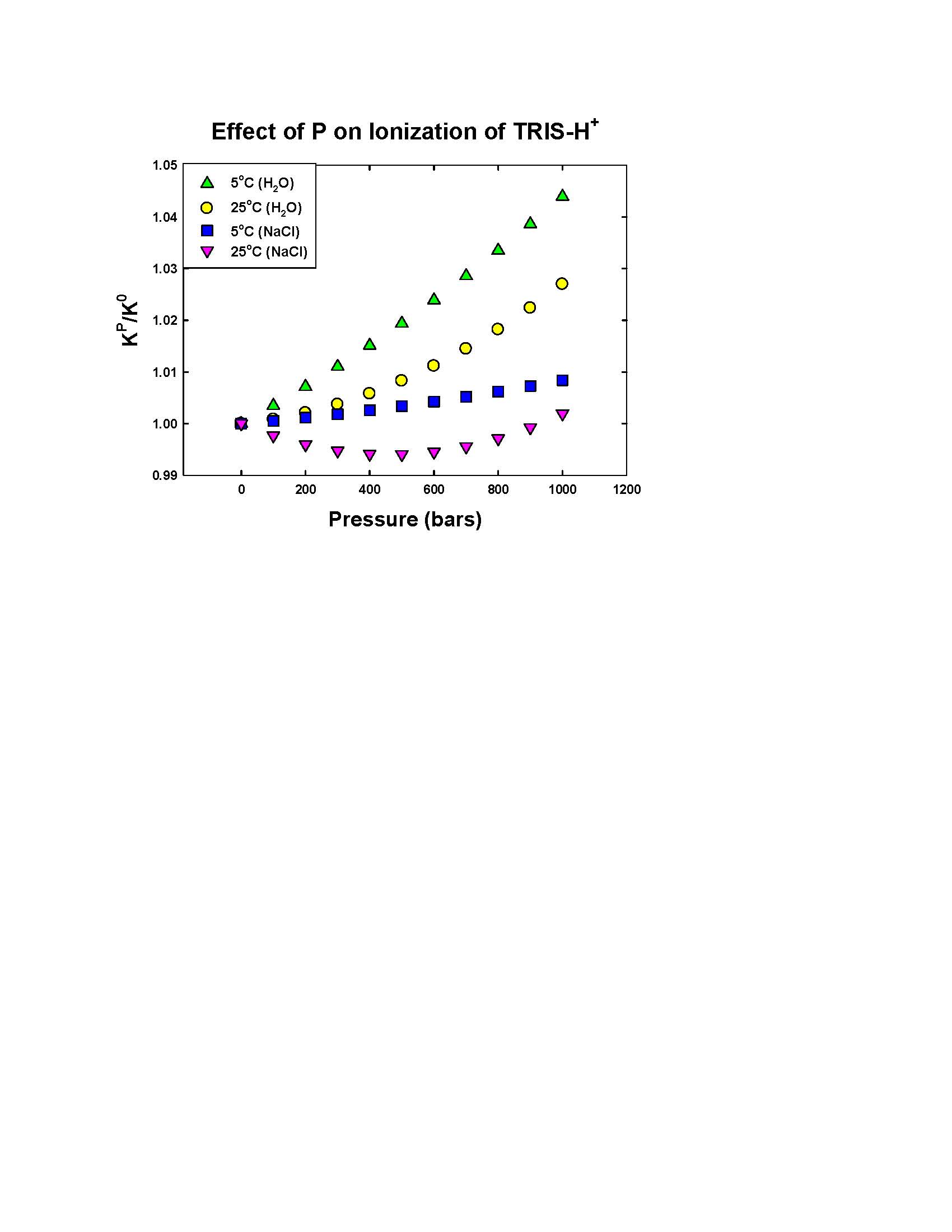