A52F-03:
Where is the equator? A definition based on the atmosphere and its implications for atmospheric chemistry and climate

The concentration of hydroxyl (OH)—the main sink for the greenhouse gases methane and hydrofluorocarbons—in Earth’s northern and southern hemispheres is an important longstanding puzzle in atmospheric chemistry. Observations of methylchloroform imply that there is about 10% more OH-loss in the southern hemisphere. In contrast, global 3-D atmospheric models (CTMs and GCMs) simulate 28 ± 10 % greater OH concentrations and methane loss in the northern hemisphere, according to a recent survey. This apparent shortcoming of many models derives in large part from an inconsistent definition of the hemispheres. For model results, OH concentrations and methane/methylchloroform loss are commonly averaged over the geographic hemispheres, with the geographic equator as the dividing line. For the observations, however, the hemispheres are separated by the atmosphere’s circulatory mixing barrier, which rarely coincides with the geographic equator. Instead the barrier to interhemispheric mixing corresponds to the rising branch of the Hadley circulation and follows the seasonal migration of the sun.

We use artificial tracers in a CTM to define the atmospheric (as opposed to geographic) hemispheres. We show that the tracer definition corresponds with the Intertropical Convergence Zone (ITCZ) where it is well defined and robust against several different tracer definitions. The atmospheric equator lies at 3°N on average (10°N in boreal summer) and extends as far as 30°N during the South Asian summer monsoon (Figure 1). When methane/methylchloroform loss rates are calculated for the dynamic and time-varying hemispheres, the CTM has just 5% greater loss in the northern hemisphere (Figure 1). Thus, using a definition of atmospheric hemispheres that is consistent with atmospheric circulations reveals that OH distributions in CTMs, while still slightly overestimating northern hemisphere OH, are much closer to observational constraints than has been implied by past work. We also discuss the implications of the unequal-sized hemispheres for other problems in atmospheric chemistry. For example, two-box models are commonly used to infer inter-hemispheric air mass exchange times from observations of SF6 or other long-lived gases, but results will be biased if the hemispheric boxes are assumed to have equal sizes. 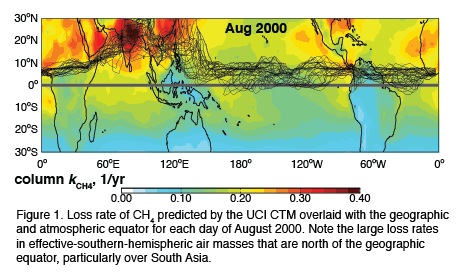