A13F-3255:
Summertime Relationships Between NOx, NOy, and O3 in the Denver-Julesburg Basin

The Front Range Air Pollution and Photochemistry Experiment (FRAPPE) took place July-August 2014 with an emphasis on measuring emissions relevant to air quality throughout the Northern Front Range Metropolitan region of Colorado. Extensive focus on this region has been due in part to its large and variable emission sources, such as the Denver-metro area and nearby oil and gas production in the Denver-Julesburg (D-J) Basin. The Denver urban area is frequently out of compliance with the national air quality standards for ozone during summer. Photochemical ozone precursors, volatile organic compounds (VOCs) and nitrogen oxides (NO and NO2) are prevalent in urban emissions. Oil and natural gas production is also known to contribute to VOC emissions in the Denver urban area, and may affect ozone levels in the region.

The focus of this presentation will be on NOx–NOy-O3 measurements conducted from a tall tower at the Boulder Atmospheric Observatory (BAO), approximately 33km north of Denver, Colorado. The tower is unique in that it is tall (300m) and located between the Denver metro area to the south and the D-J basin to the north (Fig. 1). During this campaign a suite of instruments were mounted in a carriage, external to the BAO tower, to collect in-situ measurements with vertical resolution or at fixed heights above ground level. A cavity ring-down instrument was used to measure NOx, ozone, and total reactive nitrogen (NOy). Additional instruments mounted in the carriage and at the BAO ground site (Picarro, HR-TOF-CIMS, and GC) provided VOC data and other tracers of air mass origin. This presentation will discuss methods for determining contributions of different emission sources to Front Range ozone, with an emphasis on high ozone days during FRAPPE. 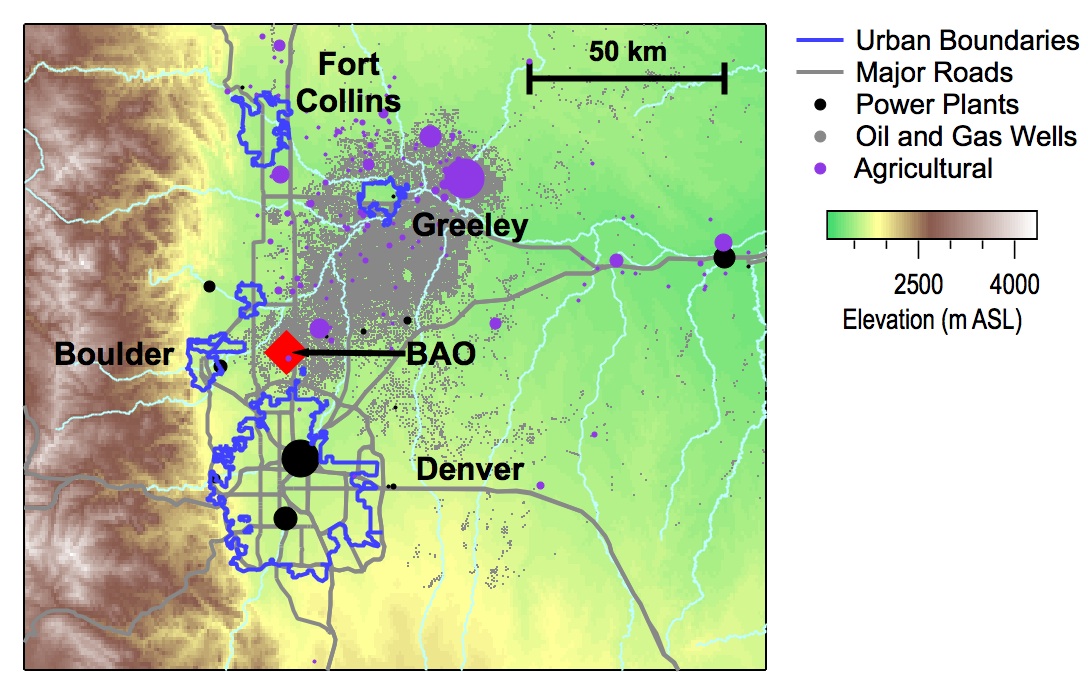