H33L-02:
An ecohydrological framework to explain shifts in vegetation organization across climatological gradients

Spatial pattern of vegetation may exhibit different degree of organization that can be interpreted as an indicator for the state of an ecosystem. In particular, it is possible to observe transitions from over-dispersed individuals (e.g. an ordered lattice) to under-dispersed individuals (e.g. clumped points) in semiarid environments. These configurations may correspond to different strategy of adaptation or optimization, whose understanding may help to predict some of the consequences of environmental change for both ecosystem services and water resources. For this reason, we have developed theoretical framework to explore the general principles behind the self-organization of vegetation in semiarid environment. The model is derived assuming a spatial distribution of individuals interpreted by the generalized double Poisson distribution and the soil water balance is solved considering the role of tree canopies and root overlaps. In this way the role of spacing between individuals is taken into account considering both the shading effect (light interception) of the canopies and the partitioning of water use due to the presence of multiple individual root systems in one point. This mathematical framework allows identifying the climatic boundaries where the clumped structure is more beneficial in terms of water use and water stress. A controlling factor for such limits is represented by the total rainfall amount, but different configurations of rainfall frequency and mean rainfall depth may modify the range of climatological conditions where over-disperse patterns are more competitive. Moreover, we also observe that plants with larger root systems are less likely to benefit from a clumped structure. These results explain observed patterns of vegetation at the continental scale. 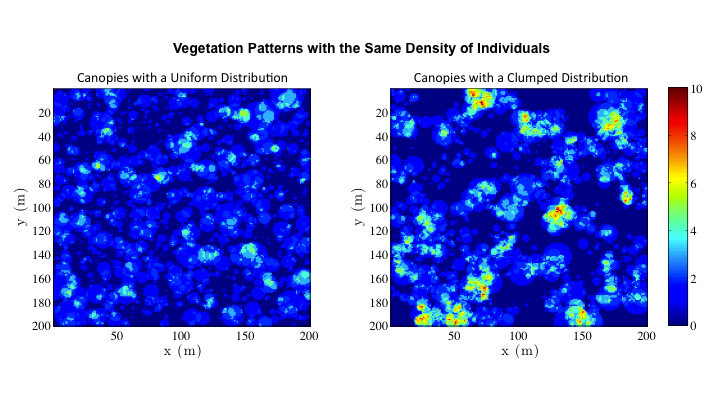