Partitioning of the earthquake energy budget into heat, radiated seismic energy, and fracture energy, is still a fundamental issue in seismology. Different estimates are provided by seismological studies, but only a few attempts have been made at using structural studies of palaeoseismic faults, exhumed and exposed at the surface, to evaluate this partitioning. Here we present an independent estimate of fracture energy based on the evolution of hydraulic properties during the seismic cycle along an exhumed fault.

The Gole Larghe Fault Zone (GLFZ, Italian S Alps) was exhumed from c. 8 km, where it was characterized by seismic activity (pseudotachylytes) but also by hydrous fluid flow (alteration halos and precipitation of hydrothermal minerals in veins and cataclasites). The fault zone has previously been quantitatively characterized (Bistacchi 2011; Smith 2013) providing a rich dataset to generate 3D Discrete Fracture Network (DFN) models and simulate fault hydraulic properties. A fundamental parameter that cannot be directly evaluated in the field is the fraction of fractures-faults that were open over a certain time period in the evolution of the fault zone. Based on field and microstructural evidence, we infer that the opening and closing of fractures resulted in a toggle-switch mechanism for fluid flow during the seismic cycle: higher permeability was obtained in the syn- to post-seismic period, when the largest number of fractures was (re)opened by off-fault deformation, then permeability dropped due to fracture cementation.

Postseismic permeability has been evaluated in a few cases in the world thanks to seismological evidence of fluid migration along active fault systems. Therefore, we were able to develop a parametric hydraulic model of the GLFZ and calibrate it to obtain the fraction of faults-fractures that were open in the postseismic period to obtain realistic fluid flow and permeability values. This fraction is very close to the percolation threshold of the DFN, and it can be converted to fracture intensity (fracture surface per unit volume in the fault zone), which could be integrated to obtain the fracture energy due to off-fault fracturing. Since the fracture energy due to on-fault processes has already been estimated for the GLFZ (Pittarello 2008), this allows us to estimate the total fracture energy. 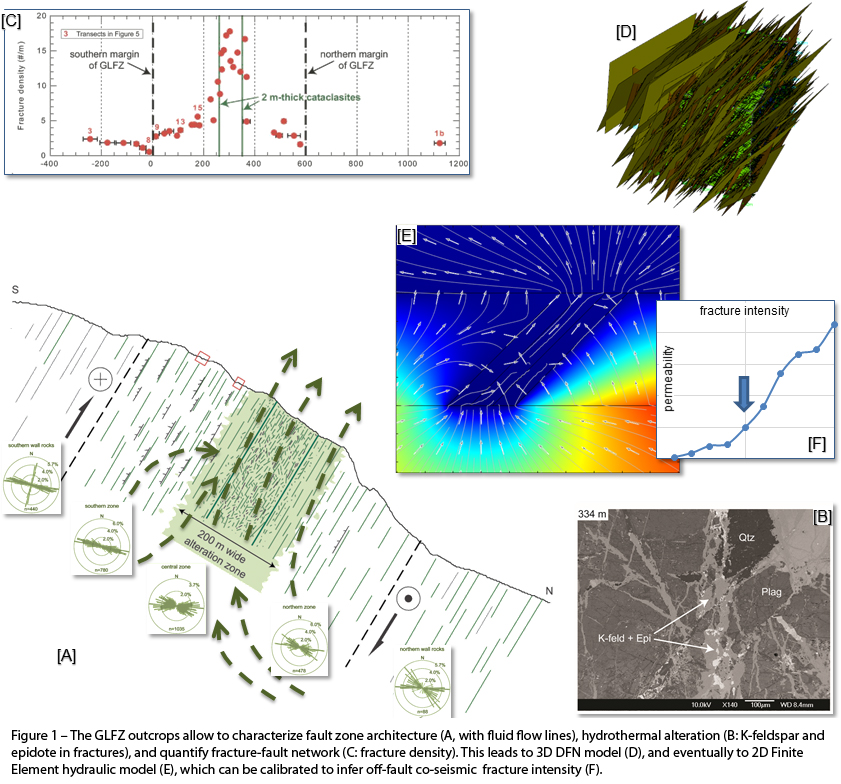