Since the proposal by Brace and Byerlee [1966] that the mechanism of stick-slip is similar to earthquakes, many experimental studies have been conducted in order to improve the understanding of rupture mechanics. Here, we report the results of macroscopic stick-slip events in saw-cut samples deformed under controlled upper crustal stress conditions in the laboratory. Experiments were conducted under triaxial laoding (σ1>σ2=σ3) at confining pressures ranging from 10 to 100 MPa. Usual a dual gain system, a high frequency monitoring array recorded the microseismicity during stick-slip sequences and the particle accelerations during macroscopic instabilities. While strain, stress and axial shortening were measured until 10 Hz sampling rate, we also recorded for the first time the dynamic stress changes during macroscopic rupture using dynamic strain gages located close to the fault plane (10 MHz sampling rate).

We show that increasing the normal stress acting on the fault plane (i) increases the intensity of foreshock activity prior to the main rupture, (ii) increases the friction along the fault plane, (iii) increases the seismic slip, and (iv) induces the transition from sub-Rayleigh to supershear ruptures [Passelègue et al., 2013]. In addition, after demonstrating that our stick-slip instabilities exhibit a purely slip weakening behavior, we estimated the rupture processes parameters including the size of the breakdown zone (R), the slip-weakening distance (Dc), the energy rate (F) and the fracture energy (G). We compare our results with linear elastic fracture mechanics and previous experimental studies.

Finally, the dynamic stress drop is almost complete at high normal stresses with dynamic friction drop ranging from 0.4 to 0.6. These results are consistent with the onset of melting, which was confirmed by our post mortem microstructural analysis (XRD, SEM, TEM). These results show that weakening mechanisms are activated after only 80 µm of slip, suggesting that, at least at the scale of asperities, the resulting dynamic stress drop could be much larger than current seismological estimates. In addition, we demonstrate that the radiation efficiency decreases with the dynamic friction coefficient, suggesting that rupture processes become more dispersive under high normal stress conditions. 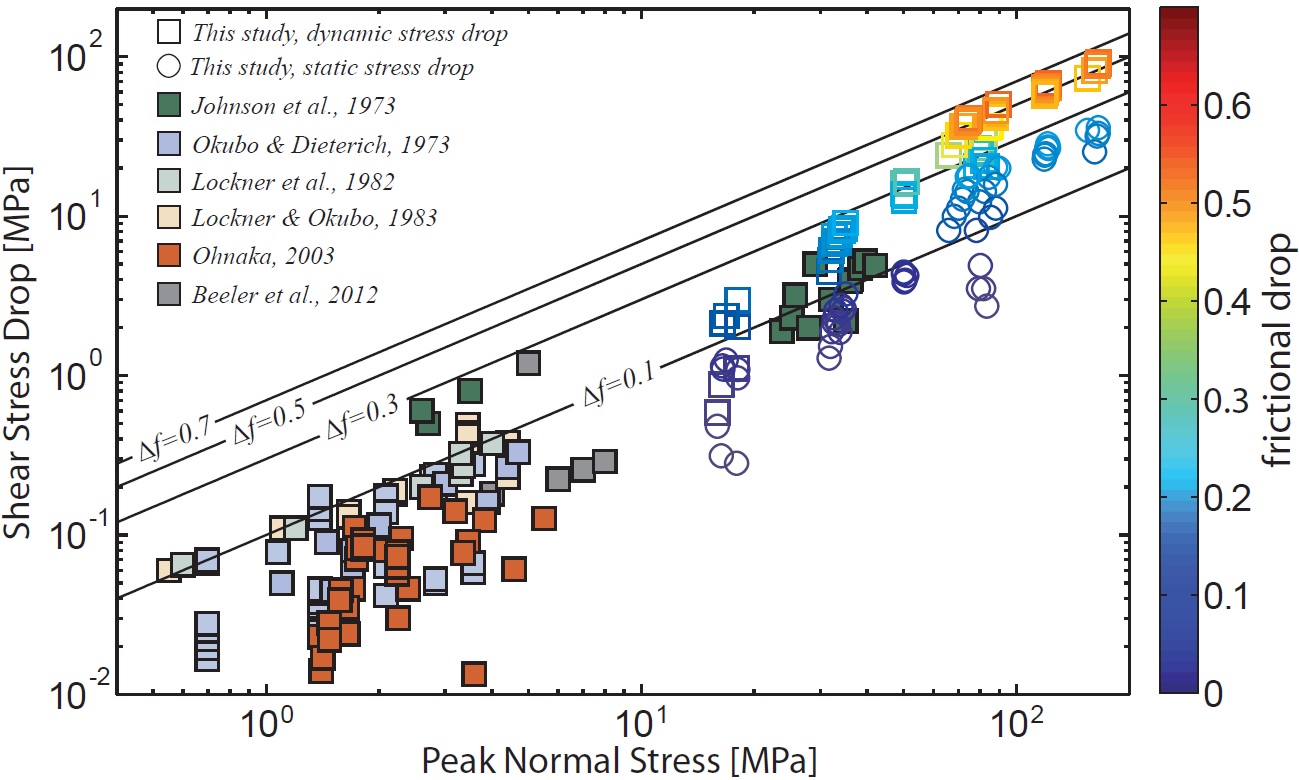