NS31D-06:
Seismoelectric coupling in partially water-saturated porous media: From the theory to the detection of saturation fronts

The seismoelectric method is based on the interpretation of the electrical field associated with the conversion of mechanical to electromagnetic energy during the propagation of seismic waves in heterogeneous porous media. We propose a poroacoustic model. This model takes into account fluid flow and the effect of the partial saturation of the water phase and is coupled with an electrokinetic model accounting for the effect of saturation. The model is in agreement with available experimental data in a variety of porous media. We also developed new scaling laws for the permeability, the streaming potential coupling coefficient, and the capillary entry pressure of porous media. The theory is developed for frequencies much below the critical frequency at which inertial effects starts to dominate in the Navier-Stokes equation (>10 kHz). The equations used to compute the propagation of the P-waves and the seismoelectric effect in unsaturated condition are solved with finite elements using triangular meshing. A first example demonstrates the usefulness of the seismoelectric beamforming, to localize saturation fronts by focusing seismic waves and looking at the resulting seismoelectric conversions. This method is applied to a cross-hole problem showing how a saturation front characterized by a drop in the electrical conductivity and compressibility is responsible for seismoelectric conversions. These conversions can be used in turn to determine the position of the front over time. The figure shows the dipolar anomaly resulting from the beamforming of seimiec energy at point A and associated with a resistivity contrast. Finally, we show how a complete two-phase flow seismoelectric theory can be developed based on the extension of the dynamic Biot theory to two-phase flow conditions and how this theory can be numerically implemented. 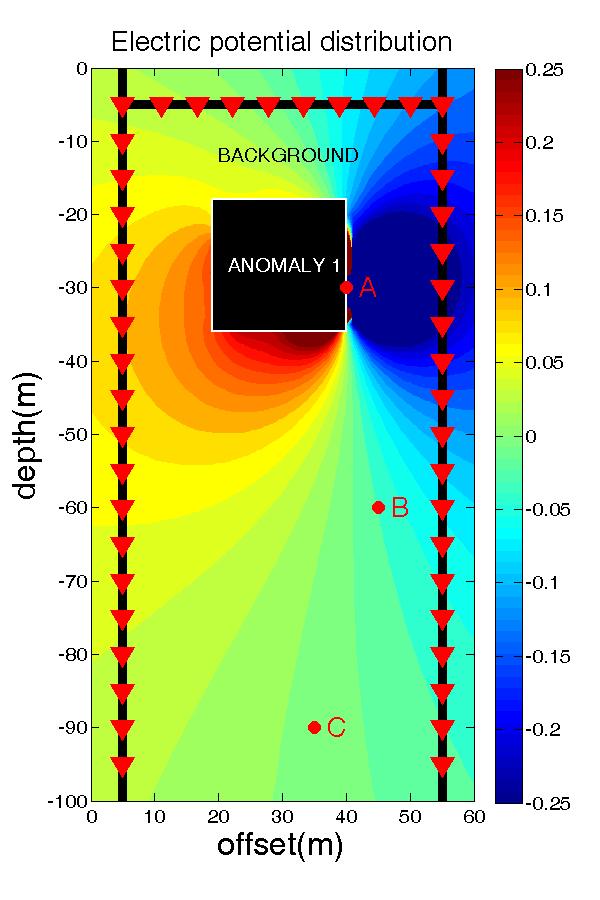