We use the oscillatory pore pressure method for simultaneous measurements of rock transport properties, such as intrinsic permeability and specific storage capacity. The pore pressure pulsing method has been described by several researchers; however we examine the relationship between a rock’s transport properties and dynamic pressure parameters, such as amplitude and frequency. We confirm that the oscillating pore pressure method accurately measures permeability; however storage capacity values suffer from measurement uncertainties. We further developed a novel method to infer the permeabilities from frequency-dependent data. Permeabilities are calculated by non-linear least-squares fitting of the pressure attenuation and phase data, measured on three rock samples at various confining pressures and oscillating pore pressure frequencies.

Permeabilities estimated for three tested specimen were in close agreement with steady-state values. Storage capacities, however, exhibit significant absolute errors. Frequency dependence of derived values were furtherexplored, and an apparent increase in permeability has been noticed. These observations do not necessarily indicate a dispersion effect of the absolute permeability of the rock sample. We explain this effect by the deviation in phase shifts, caused by non-Darcy or radial flow. Permeabilities still can be inverted with high accuracy from the frequency-dependent amplitude ratio data, as well as lower frequency limit of phase data by nonlinear least-squares fitting of the theoretical permeability curve. Our future work includes measuring lower permeability rocks, such as tight gas sandstones and shales. We also plan to expand the working frequency range by utilizing pore pressure intensifier as a source of pressure oscillations. 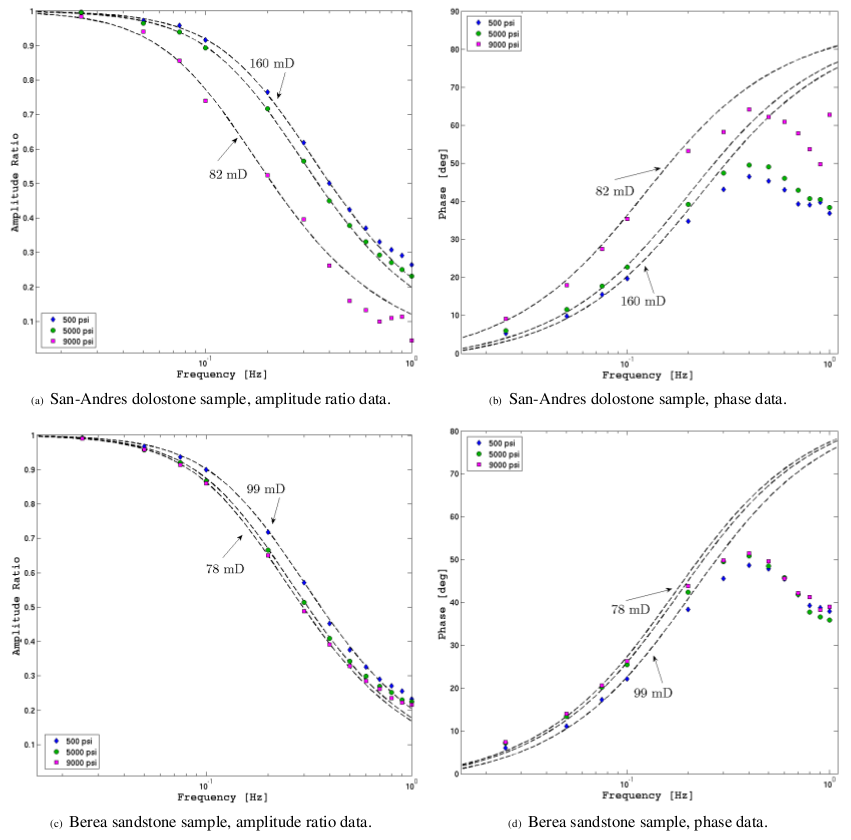