Is liquid water flowing near the surface of Mars today? If recurring slope lineae (RSL) on Mars are effectively ephemeral trickles of water, consistent with observational evidence, where is this water coming from, what is its volume, what is its salinity, is it flowing on the surface or just beneath, and when does it flow during the course of the day? Without an in situ or hovering platform or new orbital instruments, these questions cannot be answered directly, but quantification of RSL behavior seen by Mars Reconnaissance Orbiter coupled with physical modeling can be leveraged to infer answers. As a first step, we are mapping all 100+ lineae in Tivat crater (45.93° S, 9.53° E, in Noachis Terra) across 14 images spanning three active seasons (Mars Years 29-31) at the ~25 cm pixel scale of the High Resolution Imaging Science Experiment (HiRISE). We are simultaneously quantifying these RSL and their evolution using a suite of measurements including length, area, sinuosity, concavity index, etc. By tracking each linea across each season, we are capturing the “life cycle” of each flow rather than merely the general evolution of the population, as has been the focus of previous studies. It is this life cycle, and its variability, that physical models must reproduce. Because so little is known about RSL, we are careful in our analyses to manage the bias caused by assuming a specific mechanism. For example, observed gaps in dark lineae could be interpreted as either separating distinct, aligned surface flows or merely reflecting a patchy expression of a single continuous subsurface flow, so we allow for both interpretations.

Preliminary results at Tivat suggest that RSL decelerate over the course of each season, and that the concavity of crater slopes is only a secondary factor in this deceleration. RSL also do not always appear to flow strictly down-gradient, but may be controlled by topography below the resolution of HiRISE terrain models. There may also be a change in the rate of downslope propagation across the season, which would have implications for the source of the water and/or the nature of the coupling of RSL activity to temperature. We will extend our study to other key sites. 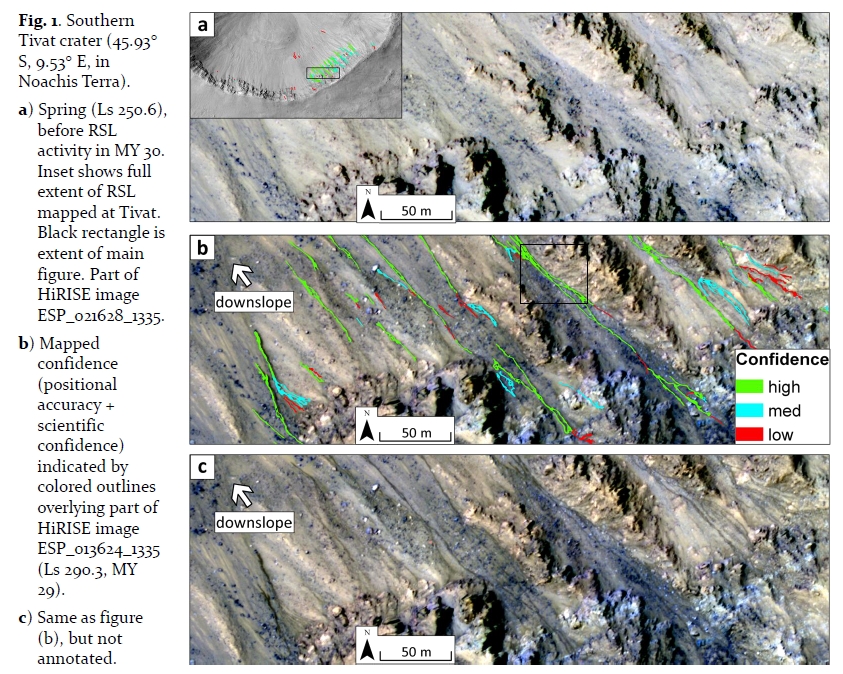