GC33B-0503:
Recent Changes in ENSO Precurosors and Climate Impacts - a Look at California

We documented a strengthening relationship between boreal winter sea surface temperature anomalies (SSTA) in the western North Pacific (WNP) and the development of the El Niño-Southern Oscillation (ENSO) in the following year. The increased WNP-ENSO association emerged in the mid 20th century and has grown through the present, reaching correlation coefficients as high as ~0.70 in recent decades. Fully coupled climate experiments with the Community Earth System Model version 1 (CESM1) replicate the WNP-ENSO association and indicate that greenhouse gases (GHG) are largely responsible for this observed increase. We speculate that shifts in the location of the largest positive SST trends between the subtropical and tropical western Pacific impacts the low-level circulation in a manner that reinforces the link between the WNP and the development of ENSO. A strengthened GHG-driven relationship with the WNP provides an example of how anthropogenic climate change may directly influence the ENSO cycle. One such example is the initiation of 2013-2014 California drought, which was accompanied by an anomalous high-amplitude ridge system. The anomalous ridge was found to emerge from continual sources of Rossby wave energy in the WNP starting in late summer, and subsequently intensified into winter. The ridge generated a surge of wave energy downwind and deepened further the media-called "polar vortex" in the northeast U.S., forming a dipole. The dipole is not linked directly with either ENSO or Pacific Decadal Oscillation; instead it is correlated with the aforementioned ENSO precursor. The connection between the dipole and ENSO precursor has become stronger since the 1970s, and this is attributed to increased GHG loading as simulated by the CESM. Therefore, there is a traceable anthropogenic warming footprint in the enormous intensity of the anomalous ridge during winter 2013-14, the associated drought and its intensity. 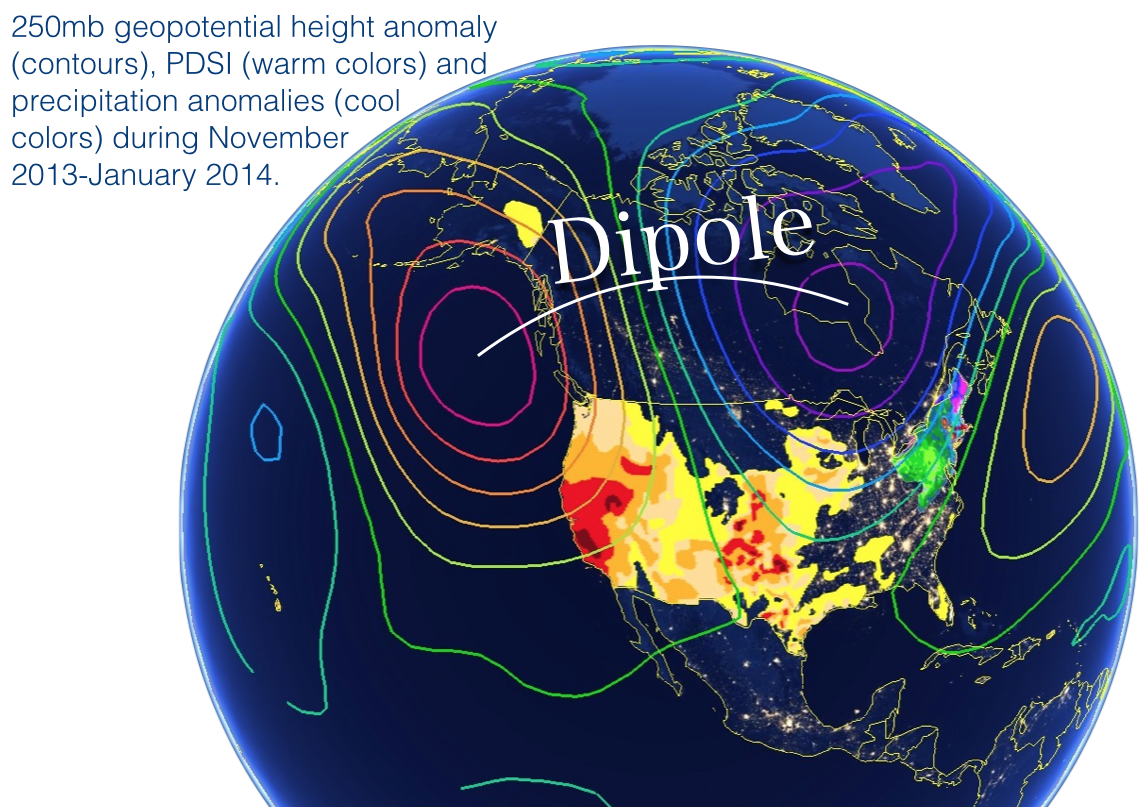