The eﬀect of clouds on large scale dynamics is represented in climate models through parameterization of various processes, of which the parameterization of shallow and deep convection are particularly uncertain. The atmospheric boundary layer, which controls the coupling to the surface, and which deﬁnes the scale of shallow convection, is typically 1 km in depth. Thus, simulations on a O(100 m) grid largely obviate the need for such parameterizations. By crossing this threshold of O(100m) grid resolution one can begin thinking of large-eddy simulation (LES), wherein the sub-grid scale parameterization have a sounder theoretical foundation. Substantial initiatives have been taken internationally to approach this threshold. For example, Miura et al., 2007 and Mirakawa et al., 2014 approach this threshold by doing global simulations, with (gradually) decreasing grid resolution, to understand the eﬀect of cloud-resolving scales on the general circulation. Our strategy, on the other hand, is to take a big leap forward by ﬁxing the resolution at O(100 m), and gradually increasing the domain size. We believe that breaking this threshold would greatly help in improving the parameterization schemes and reducing the uncertainty in climate predictions.

To take this forward, the German Federal Ministry of Education and Research has initiated a project on HD(CP)2 that aims for a limited area LES at resolution O(100 m) using the new unified modeling system ICON (Zängl et al., 2014). In the talk, results from the HD(CP)2 evaluation simulation will be shown that targets high resolution simulation over a small domain around Jülich, Germany. This site is chosen because high resolution HD(CP)2 Observational Prototype Experiment took place in this region from 1.04.2013 to 31.05.2013, in order to critically evaluate the model. Nesting capabilities of ICON is used to gradually increase the resolution from the outermost domain, which is forced from the COSMO-DE data, to the innermost and ﬁnest resolution domain centered around Jülich (see Fig. 1 top panel). Furthermore, detailed analyses of the simulation results against the observation data will be presented. A reprsentative figure showing time series of column integrated water vapor (IWV) for both model and observation on 24.04.2013 is shown in bottom panel of Fig. 1. 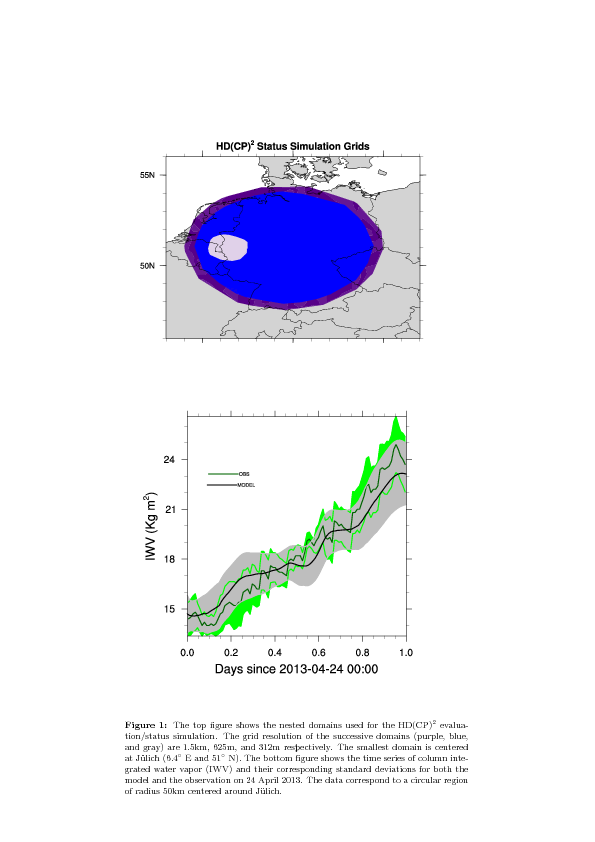