The Long Valley volcanic region in eastern California contains three magmatic foci; Long Valley Caldera (760-50 ka), Mammoth Mountain (120-8 ka), and Mono-Inyo Craters (60–0.3 ka). Zones of partial melt and/or hydrothermal fluids are known to exist under all three systems, but are not well constrained. In 2013-2014, we collected 110 magnetotelluric stations within a 40km x 45km grid, from Mono Craters through Long Valley Caldera. To date, a 3-D resistivity model has been created for Mono Craters showing three distinct features. Best constrained is a 150±50 km3, near vertical conductive anomaly (0.1-3 Ω·m) located under the southeast margin of Mono Craters at depths from 10km to >35km, which may reflect the deep, partially molten source region for Holocene eruptions. Electrical resistivity calculations suggest temperatures of 775°C±50 and a partial melt fraction 0.2 ±0.1. The location, melt fraction, and volume estimated in this study are consistent with those from teleseismic experiments conducted by Archauer (1986) and Dawson et al. (1990). A second conductive anomaly (0.5-5 Ω·m) at 12km to >35km depths was found 10km west of the Mono Craters near the eastern front of the Sierra Nevada. This anomaly coincides with a zone of sporadic, long-period earthquakes interpreted as “fluid-driven” by Pitt et al. (1994). This anomaly may reflect a zone of hydrothermal fluid infiltration originating from the aforementioned magmatic region. The third feature identified in this study is a resistive anomaly (103-104 Ω·m) under Aeolian Buttes, a Cretaceous quartz monzanite outcropping within the Bishop Tuff between Mono Craters and the Sierran front. The anomaly, which fills a crustal volume of 1500 ±500 km3, balloons upward from a deep root at >30 km to within 2 km of the surface and is interpreted as a cold, granitic pluton as supported by gravity and magnetic data. Future work will extend our three-dimensional resistivity model southwards to Inyo Craters and Long Valley Caldera. 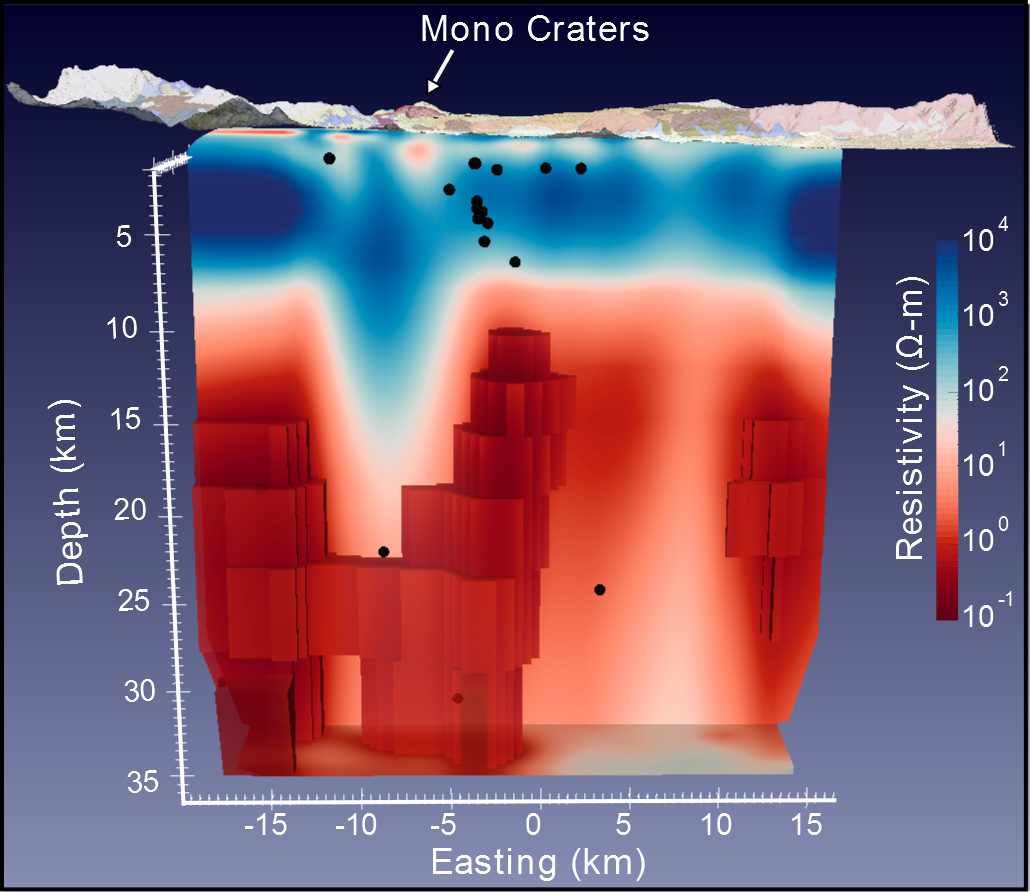