Chang'E-3 (CE-3) is part of the second phase of the Chinese Lunar Exploration Program, incorporating a lander and China's first lunar rover. It was landed on 14 December, 2013 successfully. Hovering and obstacle avoidance stages are essential for CE-3 safety soft landing so that precise spacecraft trajectory in these stages are of great significance to verify orbital control strategy, to optimize orbital design, to accurately determine the landing site of CE-3, and to analyze the geological background of the landing site. Because the time consumption of these stages is just 25s, it is difficult to present spacecraft’s subtle movement by Measurement and Control System or by radio observations. Under this background, the trajectory reconstruction based on landing camera images can be used to obtain the trajectory of CE-3 because of its technical advantages such as unaffecting by lunar gravity field spacecraft kinetic model, high resolution, high frame rate, and so on. In this paper, the trajectory of CE-3 before and after entering hovering stage was reconstructed by landing camera images from frame 3092 to frame 3180, which lasted about 9s, under Single Image Space Resection (SISR). The results show that CE-3’s subtle changes during hovering stage can be emerged by the reconstructed trajectory. The horizontal accuracy of spacecraft position was up to 1.4m while vertical accuracy was up to 0.76m. The results can be used for orbital control strategy analysis and some other application fields. 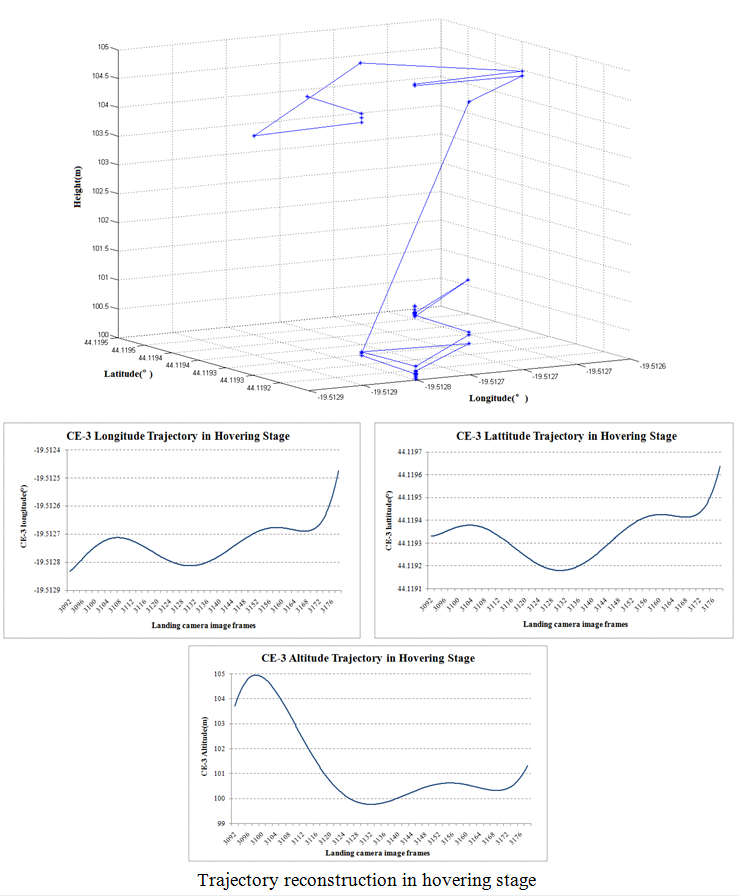