P13D-3844:
The Environment Analysis in the CE-3 Landing Region

To understand the environment and select detecting objects for the Yutu Rover, NAOC used the DEM and DOM data obtained by CE-2, geological data released by USGS, and high resolution image captured by CE-3 and LRO-NAC to analyze the topographical characteristic, geologic age, Geomorphological feathers and new dust distribution in two scale levels. The first level is 45km×75km, and another one is 4km×4km. The center of the study region is the CE-3 landing site (19.51°W, 44.12°N). The following is the initial conclusions:

(2) The landing site lies on the edge of a lunar mountain with a decline tendency from west to east, and the topographic slope and roughness of the landing region is low, which is the typical characteristic of lunar mare. There is a big crater with diameter of 430 meters in the west of the landing site, and lots of stones in different colors on the rim of this crater, shown in the Figure2.

(3) By comparing the images captured by LRO-NAC before and after the landing, much lunar dust was blown away by the engine plume during the landing of CE-3. The change scope is about 60m with from east-west and 135m length from south-north. The direction of landing is from south-north, so the length is larger than the width, shown in the figure 3.

(4) In the initial stage, the Yutu Rover was suggested to move in south direction and late in north direction, which would get more scientific data and result. 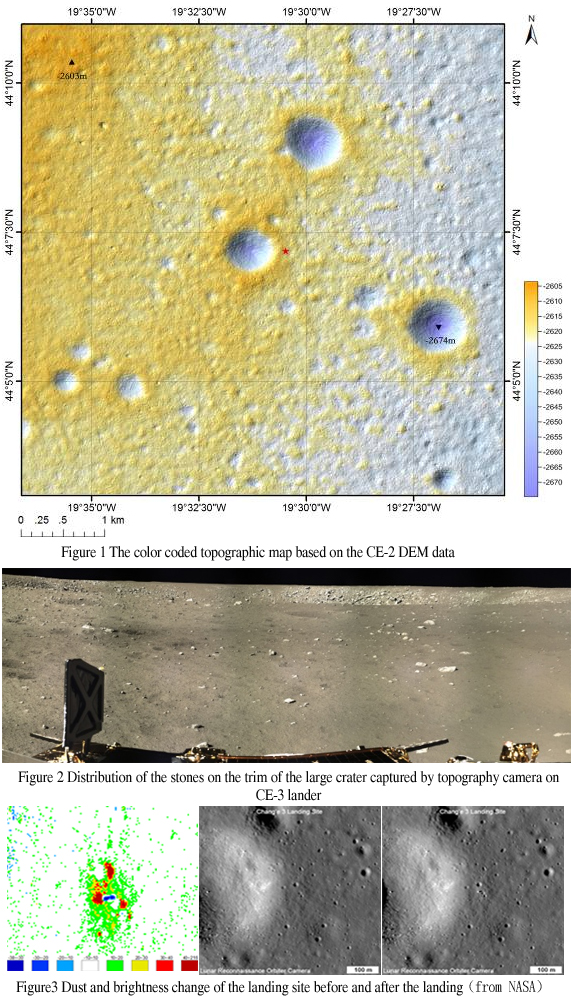